Antoine Fuqua (born January 19, 1966) is an American film director and producer. Before he became director of Olympus Has Fallen, he also directed rather accomplished music videos and Action films such as The Replacement Killers, Bait, Training Day, Tears of the Sun, King Arthur, Shooter and Brooklyn's Finest. He also directed the 2014 film The Equalizer (with Melissa Leo), the remake of the 80's TV show.

Lead star and co-producer Gerard Butler being directed by Fuqua. 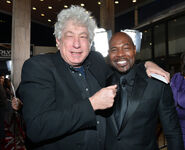 At the premiere of the film with Executive Producer Avi Lerner 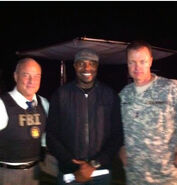 Fuqua plans out a scene with Stunt Coordinator Keith Woulard

Retrieved from "https://olympus-has-fallen.fandom.com/wiki/Antoine_Fuqua?oldid=7919"
Community content is available under CC-BY-SA unless otherwise noted.