Benjamin "Ben" Asher (born April 15, 1967) was the 45th President of the United States. During his presidency, Asher suffered the devastating loss of his wife and only 18 months later, the White House was attacked.

Asher witnessed the deaths of multiple American citizens, allies and friends before the attack was over and though he survived, he was wounded. After recovering from his wounds, Asher began the rebuilding process, determined to fight through any dangers that occur. He was eventually succeeded by Allan Trumbull.

At an unknown time, Benjamin Asher married a woman named Margaret. The two later had a son, who they would name Connor. Asher would later be elected as the 45th President of the United States.

His Secret Service codename is Southpaw.

On December 25, 2011, President Asher and his wife Margaret left Camp David for a formal gathering. Asher and his wife rode in the Presidential limo, while their son Connor rode with Mike Banning, a Secret Service agent who was a soldier for 75th Ranger Regiment, Special Forces.

En route to their destination, President Asher and Margaret were involved in a car accident that left the limo suspended over the side of a bridge. Though Asher attempted to save her, he was pulled from the car by Agent Banning.

The car plummeted to the frozen river below, killing her on impact, with President Asher screaming in agony. Asher, Connor and his Presidential detail sat on the bridge, in shock of the events that had occurred. Despite being saved by Banning, Asher was haunted by that night and when he sees Banning, it brings it back to him. As a result, Banning was transferred to the Treasury and demoted to a desk job until Asher could be able to get over the tragic experience..

18 months later, Asher is about to have a meeting with the South Korean Prime Minister. While getting ready, he asks Connor if he would like to go to Camp David, but he refuses and prefers the beach. Soon, he is summoned to his office, where at 7 p.m. the Prime Minister arrives, alongside Dave Forbes, who transferred to South Korea after the accident. During their talk, a North Korean AC-130 gunship starts shooting around D.C., forcing the President to head to the PEOC with the Prime Minister and their agents.

When the gunship is soon taken down and gunfire starts at the surface, the Prime Minister's aide and guards (including Forbes) soon grab those guns from the Presidential detail and kill them, leaving only Asher, the Vice President, Ruth and several other hostages where the aide, revealing to be a disguised North Korean terrorist named Kang Yeonsak, kills the Prime Minister in front of the Speaker.

After being captured, Agent Mike Banning was in the White House, with plans to attempt to rescue President Asher.

In an attempt to throw the authorities off, Kang has several of his men and the rest of the hostages blown up in a helicopter, but Banning has already made it to the PEOC, where he kills two guards but runs out of ammo. As Yu and Banning fight, Asher attempts to wrestle the gun away from Kang, only to be shot in the abdomen. Banning, who killed Yu, soon engages Kang in a brutal hand-to-hand combat and stabs him in the brain with a knife. After tending to Asher for a few seconds, Banning shuts down Cerberus saving America and soon takes Asher out of the White House.

After his wounds had mended, Asher gave a speech to the American people in regards to the United States being strong and his assurance that the country will rebuild from the wreckage.

He then left the room, joining his son Connor and passing Banning, who had returned to his assignment on the Presidential detail.

Three years later, the British Prime Minister died suddenly and all of the world leaders gathered for his funeral. However, it turned out to be a trap set by Aamir Barkawi and his son Kamran, enraged at the death of their family in a drone strike authorized by Asher to take out Barkawi. Due to Mike Banning secretly changing Asher's schedule for safety reasons, Asher alone avoided the initial strike against the government leaders and attempted to escape in Marine One. However, the helicopter was shot down by terrorists, killing Lynne Jacobs.

Banning was able to signal a satellite of his intentions to seek refuge with Asher at an MI6 safehouse manned by his old friend Jacqueline "Jax" Marshall. While on the run, Asher ordered Banning to kill him if it came down to it, unwilling to be taken alive so that he could be executed where everyone could watch, including his son. The two men received a message from Vice President Allan Trumbull using a code based off of an earlier conversation he and Banning had had stating that they had a Delta Force team coming to extract the President while Banning sent Jax to discover the government mole helping out the Barkawi's. However, when the team arrived, Banning realized that they were actually terrorists in disguise and had Asher hide with a gun while he took on the team by himself. At the end of the fight, Asher emerged and shot the last terrorist himself, saving Banning's life.

With no other options, the two men decided to flee for the US Embassy despite the danger that the terrorists would be blocking the way. Using a bulletproof-car from the safehouse, Banning and Asher made a run for it, somewhat hampered by Asher's rusty driving skills. Though they initially managed to escape the terrorists, the vehicle was overturned and Asher captured to be executed live on the Internet.

As the execution approached, Kamran beat Asher who remained defiant even in the face of certain death. As the broadcast began, Asher recited his oath of office, refusing to beg for his life. Moments before Kamran could decapitate Asher, Banning stormed the room, having linked up with a combined Delta Force/SAS team to attack the hideout. Banning killed most of the terrorists in the room and freed Asher, but Kamran escaped and forced both Banning and Asher into a gunfight with his men. Heavily outnumbered and running out of ammunition, Banning had Will Davies blow up the building, killing all of the terrorists, while he and Asher took cover in an elevator shaft.

In the aftermath of the bombing, the two men were discovered alive and relatively unharmed in the shaft by Davies and his men. Banning turned over a phone he took from Kamran which allowed Allan Trumbull to launch a drone strike that killed Aamir Barkawi and ended his threat for good.

After the attacks on London, Asher's presidency continued until his term in office was up. Afterwards, his Vice President, Allan Trumbull became his successor in office.

President Benjamin Asher was portrayed by Aaron Eckhart in Olympus Has Fallen and London Has Fallen.

Profile Dossier for President Asher on the official movie site 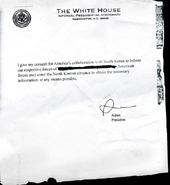 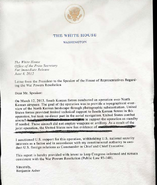 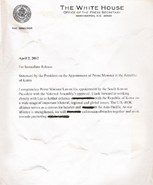 Add a photo to this gallery
Retrieved from "https://olympus-has-fallen.fandom.com/wiki/Benjamin_Asher?oldid=12752"
Community content is available under CC-BY-SA unless otherwise noted.