Cody Daniel (born December 31, 1985) is an actor who appeared in Olympus Has Fallen.

Daniel has been an actor and stand-in on various television shows, mini-series events and films including the TV shows "Chase", "Dallas" and "Big Rich Texas". He appeared in movies such as Pot Zombies 2: More Pot, Less Plot, Chef, Jurassic World, Sacrament and I Saw the Light.

Daniel portrayed a Secret Service agent with a football briefcase who was killed in Olympus Has Fallen. 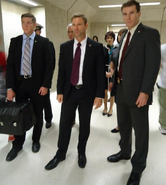 Retrieved from "https://olympus-has-fallen.fandom.com/wiki/Cody_Daniel?oldid=9804"
Community content is available under CC-BY-SA unless otherwise noted.