Stabbed in the head by Mike Banning

Dave Forbes (April 17, 1962 – July 6, 2013) was a member of the United States Secret Service who served in the protection detail of U.S President Benjamin Asher. After the death of First Lady Margaret Asher, he left the Secret Service and went to work as a security specialist for South Korean Prime Minister Lee Tae-Woo. Then he went rogue and helped North Korean terrorist Kang Yeonsak and his men to capture the White House. He was killed by his former teammate Mike Banning.

Forbes was a member of the President Asher's Presidential Detail. At some point in time, he went to New York City with fellow agent Mike Banning for unknown reasons. Shortly after the death of First Lady Margaret Asher, Forbes resigned from the Secret Service on May 15, 2012 and transferred to the private sector working in security detail for South Korean Prime Minister Lee Tae-Woo.

He only reveals a bit of what caused him to go rogue in that he did not vote for President Benjamin Asher and felt like the United States of America was going against everything it once stood for. The disgusted Asher head-butted Forbes for his treachery. During the attack, he is dispatched to kill his old friend, Mike Banning. He runs into Banning, who is unaware that he defected to Kang's organization, and the two of them reminisce briefly on the old days.

Mike, still believing that Forbes is on his side, prepares to continue on his infiltration. Forbes unintentionally mentions Kang's name and Banning, realizing that Forbes couldn't know the man's name without being in the bunker with him, deduces that Forbes isn't who he seems to be. Forbes, seeing a gun in Banning's hand, attacks him. The two had a brief fight, but Banning wins and stabs him in the heart. Whilst on the edge of his death, Mike interrogates Forbes and he admits that his own idealistic views of America led him to be sidetracked and, therefore, manipulated by Kang, showing remorse for his actions after seeing just how crazy Kang really is. Banning convinced the regretful traitor to tell Kang on the radio that he killed Banning in order to buy some time to save President Asher, which Forbes did so. Mike stabbed Forbes in the head or neck and killed him with Forbes giving him a nod, apparently in acceptance of his actions. This is also a similar method used in the death of his master, Kang, later in the movie.

Dave Forbes was portrayed by Dylan McDermott in Olympus Has Fallen.

Profile Dossier for Forbes on the official movie site 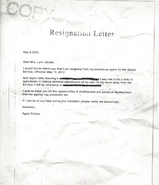 The Koreans for United Freedom terrorist group enlisted Forbes as their "Inside Man"
Add a photo to this gallery
Retrieved from "https://olympus-has-fallen.fandom.com/wiki/Dave_Forbes?oldid=12786"
Community content is available under CC-BY-SA unless otherwise noted.