Dylan McDermott (born October 26, 1961) is an American actor who portrayed Dave Forbes in Olympus Has Fallen.

McDermott is best known for his role as lawyer and law firm head Bobby Donnell on the ABC legal drama series The Practice, which earned him a Golden Globe and an Emmy Award nomination. He also starred in the TNT drama Dark Blue and the limited CBS drama Hostages (the latter of which also had him as a villain trying to harm the President of the U.S.). He also appeared on Tales from the Crypt", Ally McBeal, Will & Grace and American Horror Story. He also starred in the TNT mini-series The Grid. He starred in the short-lived CBS crime drama Stalker.

McDermott's film roles include Hardware, Steel Magnolias, In the Line of Fire (another well-known role where he played a Secret Service agent), the 1994 version of Miracle in 34th Street, Texas Rangers, The Messengers, The Campaign and Freezer. 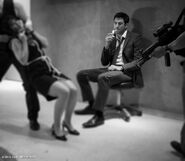 Behind the scenes on-set photo

With actor Cody Daniel
Add a photo to this gallery

Retrieved from "https://olympus-has-fallen.fandom.com/wiki/Dylan_McDermott?oldid=9370"
Community content is available under CC-BY-SA unless otherwise noted.