Ruth McMillan (born November 1, 1961) was the Secretary of Defense for President Benjamin Asher during his presidency. She was taken hostage in the White House when it was taken over by sadistic North Korean terrorist mastermind Kang Yeonsak and his co-conspirators, and was nearly killed during the crisis when Mike Banning saved her life.

Three years later, she was with Vice President Allan Trumbull and other government officials on handling the London terrorist attack crisis.

Little is known about McMillan's early life. McMillan was born on November 1, 1961. Sometime later in her adulthood, she became the Secretary of Defense when Asher's presidency began. It is also revealed that she is married.

McMillan was present during a meeting at the Oval Office about the current situation with North Korea and the meeting with South Korean Prime Minister Lee Tae-Woo. After Speaker Allan Trumbull suggested to threatened military action to stand down from the border and stop their missile tests, McMillan suggests that North Koreans are rational and suggest they bluff them and they'll call it. Trumbull inquiries as to who says they'd be bluffing. After President Asher asked Vice-President Charlie Rodriguez on his opinion, he goes with McMillan's idea. After Trumbull is excused, President asked McMillan when will Prime Minister Lee arrive in the White House and she replies around 7:PM.

At 7:PM, she was present during the meeting between President Asher and Prime Minister Lee about the situation with North Korean troops getting too close to the DMZ. Then Agent Roma warned the president that the incoming attack. McMillan quickly followed everyone to the elevator that leads to Presidential Emergency Operations Center (PEOC), which is an underground presidential bunker in the White House.

Once McMillan and the others arrived in the bunker, which was 120 feet underground, she went inside it. She awaited in the command center console as the customized C-130 Hercules was attacking Washington D.C. After the C-130 was shut down, McMillan made a brief call. Then President Asher came to her, asking where his son Connor since he wasn't with them. McMillan didn't know how to answer that.

After learning that White House was under ground attack, she, along with the President Asher and Vice President Rodriguez we're having a quiet discussion when several members of Prime Minister Lee's detail, including former Secret Service agent Dave Forbes, killed the Secret Service agents in the bunker, revealing themselves to be traitors. As the terrorists moved the hostages, McMillan helped moved the presidential aide Mary Jane Fuller over the right side of the railing of the command center as the terrorists want them to be at as the rest of the terrorists seize the White House.

After the execution of Prime Minister Lee, McMillan was present when President Asher confronted Forbes for his treachery as the traitor demands the hostages at gunpoint to put their hands on the railings. When Asher refused, McMillan sees Forbes having a terrorist name Cho brought the White House nurse over. Despite pleas from her and other hostages, McMillan watches in horror as Forbes nods to Cho, who executes the nurse in front of them. When Forbes threatens McMillan, the president gave in and surrendered, which the terrorists use zip-ties to bind their wrists to the railing. The leader of the terrorists, Kang Yeonsak, says that it takes their own forces to arrive in the White House in 15 minutes and his own men took it in 13 minutes.

When Banning made a video call to Kang and confronted him, Kang learned that Banning locked out his video access, preventing him from making calls to the Pentagon and executing any hostages in the live feed. Kang, angered over losing his communications, has told his men to bring McMillan with them to the front lobby. Although McMillan tried to put up the struggle, she was dragged by two men out of the bunker while yelling out that she pledge her allegiance to the flag of the United States of America.

When the injured McMillan was taken to the front lobby, she stumbled down. Cho tried to force her up, but the defiant McMillan only told him that Kang is out of his mind. So Kang grabbed her by the hair and told her to walk. As the beaten up McMillan reluctantly walked towards the front door, Kang was preparing to execute her when Banning, who anticipated that Kang would make that move, shot and killed Cho, which distracted the terrorists. The alarmed McMillan turned around and saw what was going on. She then slowly ran out of the White House and the U.S. troops got her out of the North Lawn safely.

When the attacks in London during the state funeral of British Prime Minister James Wilson happened, McMillan was in the White House situation room. As Vice President Trumbull arrived and was filled in, the drone arrived in London and McMillan sees the devastation of the attacks in London. She was horrified by the site of it. Then McMillan heard from NSA Deputy Director Ray Monroe that President Asher in aboard Marine One and is heading to Stansted Airport where Air Force One landed. Then she watched in horror as terrorists shot down Marine One with Stinger missiles and it crashed into a park.

After that, McMillan sees the video message from the mastermind behind the attacks in London, arms dealer and terrorist mastermind Aamir Barkawi, admitting he is responsible for the attacks in London as revenge for a drone strike that targeted him killed his daughter. Barkawi announced on the video that he is going to war with the Western world and he will bring fear to them. McMillan said that Barkawi is number 6 on their 10 most wanted list. Then Barkawi called them on the encrypted video call and McMillan listened on the conversation between Trumbull and Barkawi. The terrorist demands Trumbull to hand over Asher and The Vice-President refused to do so. McMillan listened as Trumbull said that Barkawi sold arms through dummy corporations and sees that look for any place that Barkawi owns in order to find him before he finds Asher.

Shortly afterwards, McMillan was standing next to Trumbull as they tried to figure out how to find Asher, as they know that British government are compromised, including the police and General Edward Clegg, the Chairman of the Joint Chiefs, said that anything unsecured could get to the wrong hands. When Monroe spotted Banning and President Asher on the satellite, sending a message to the satellite from a hand signals, McMillan sees that Banning is letting out his left hand and she translates that the left hand is nicknamed Southpaw, which is Asher's Secret Service code-name, and he is letting out six fingers. General Clegg says it's shorthand for MI-6, leading the others to know that Banning is taking Asher to a MI-6 safe-house. McMillan smiled in relief as Trumbull ordered everyone to find every MI-6 location in the area.

McMillan was present as Trumbull speaks to Chief Inspector Kevin Hazard, MI5 Counter-Intelligence chief John Lancaster and other high-ranking officials in the video conference at Scotland Yard. She learned that Wilson was actually poisoned, leading everyone to learn that his state funeral, a must-attend event for Western leaders, was a trap. She also overheard that several first responding units in London are killed or missing and the terrorists are impersonating them.

Later, McMillan, along with Trumbull and Monroe, spoke to Hazard and MI6 agent Jacquelin "Jax" Marshall on the video chat about the lead they found on Barkawi. They told Hazard and Marshall that one of Barkawi's companies owned a construction site in London, but it's drawing an unexpected amount of power and there has been no communications in that building, leading them to believe that is where Barkawi's main headquarters was at.

After London Has Fallen Edit

After the attacks in London, McMillan continued her job as Secretary of Defense. However, when Asher's presidency ended it could be implied that McMillan may have retired from her position when Allan Trumbull's presidency started.

Ruth McMillan was portrayed by Melissa Leo in Olympus Has Fallen and London Has Fallen.

Profile Dossier for Ruth McMillan on the official movie site 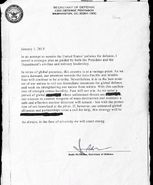 Appearing in London Has Fallen
Add a photo to this gallery
Retrieved from "https://olympus-has-fallen.fandom.com/wiki/Ruth_McMillan?oldid=11043"
Community content is available under CC-BY-SA unless otherwise noted.